Amid modest overall H1 results for two live entertertainment mainstays, it's revenue from ticketing that's once again proving the most consistent platform for growth 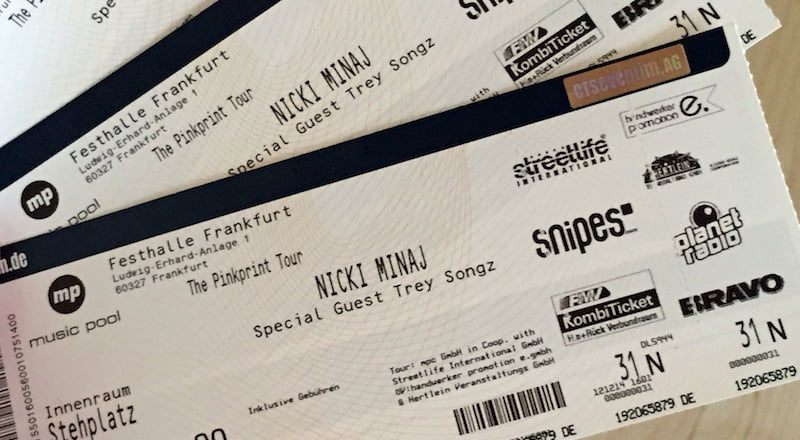 Tickets for Nicki Minaj's 2015 show at the Festhalle Frankfurt, sold by CTS Eventim

In further confirmation the major players in the global entertainment industry are coming increasingly to rely on their ticketing subsidiaries as key drivers of profit, both Vivendi and CTS Eventim yesterday posted growth in ticketing that far outperformed their businesses as a whole.

Only a small proportion of the conglomerate’s overall revenues are contributed by Vivendi Village (the subsidiary that includes its ticketing operations, live event producer Vivendi Talents&Live, the Olympia music venue and more) – €54 million in H1 2016. However, its growth of 6.9% stands in contrast to UMG, which increased revenues only by 1.6%, Canal+ Group, which declined 3.5%, and video streaming service Dailymotion, which lost €24m.

Eventim’s live entertainment business (following the trend seen in its Q1 results) was “not able to match the record set in 2015”, says CEO Klaus-Peter Schulenberg, owing to a “smaller number of major tours”. But while the multinational posted a 5.5% drop in revenue to €261.9m, the “high-margin ticketing segment once again achieved double-digit year-on-year-sales and earnings growth”, increasing revenue by 10.9% to €161.3m.

The Eventim and Vivendi results follow similarly strong showings earlier in the year from myticket.de, StubHub and Ticketmaster

Both Vivendi and Eventim have expanded their ticketing reach in 2016, with the former buying Flavorus from bankrupt SFX Entertainment for US$4m and the latter partnering with Egmont and Sony Music to launch new platforms in Scandinavia and Latin America, respectively. CTS Eventim also provided ticketing for the recent Olympic Games in Rio de Janeiro, and Schulenberg describes sport as an “important driving force” for the company, highlighting a recent agreement with the German Handball Association to provide ticketing for its events until at least 2020.

Schulenberg also uses Eventim’s financial report to affirm the company’s commitment to mobile ticketing, which he describes as “becoming increasingly important”. IQ reported in June that the global market for tickets sold through mobile apps is expected to grow at over 20% annually until 2020.

The Eventim and See Tickets/Digitick results follow similarly strong showings earlier in the year from myticket.de, StubHub and Ticketmaster, with each business outshining parent companies DEAG, eBay and, to a lesser extent, Live Nation, respectively. Ticketmaster sold its most-ever tickets in a single month in February 2016.