MSG's 2016 financial results, its first since its spin-off of broadcaster MSG Networks, showed a significant drop in revenue and losses of almost $59m 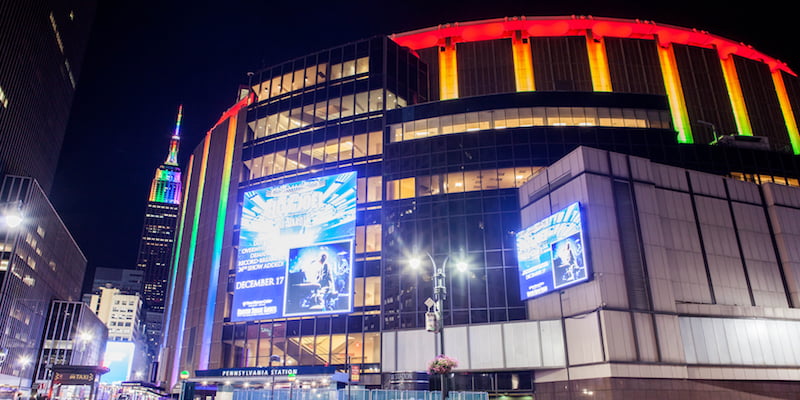 The company – which owns the eponymous 20,000-capacity New York entertainment and sports venue, as well as Radio City Music Hall and the Beacon Theatre in New York, the Chicago Theatre, the LA Forum, the New York Knicks and New York Liberty basketball teams and the New York Rangers ice-hockey team – reported revenue of US$1.1 billion in its latest financial results, released last week, compared to $1.62bn in the same period ending 30 June 2015.

The latest financial figures are the first year-end results since MSG’s spin-off of its sports TV and radio service, MSG Networks, into a separate company on 30 September 2015, and as such aren’t a like-for-like comparison.

However, its entertainment division’s results for the fourth quarter (Q4) of the 2016 financial year also declined compared to the same period last year, which the group attributes to losses incurred by the New York Spectacular Starring the Radio City Rockettes production at Radio City and the “absence of a $3.6 million insurance recovery, recorded in the prior year quarter, related to lost revenues” from the show due to Hurricane Sandy.

“At the time of our spin-off we laid out a plan on how we would grow our new standalone live sports and entertainment company, and are pleased with the significant progress we’ve made on executing that strategy”

MSG’s share price fell just over 2% on the publication of the new figures.

David O’Connor, MSG’s president and CEO, says: “At the time of our spin-off [of MSG Networks] last September, we laid out a plan on how we would grow our new standalone live sports and entertainment company, and are pleased with the significant progress we’ve made on executing that strategy. We took significant steps to strengthen our position in live experiences through our investment in Boston Calling Events and our announced plans to expand into Las Vegas, where, similar to the [LA] Forum, we think we can successfully fill a need by building a groundbreaking venue focused on music and entertainment.

“As we look ahead, we are excited about the company’s future and remain confident that we have ample opportunities, both organic and external, to drive attractive long-term growth for our company.”

The Madison Square Garden Company is believed to preparing a bid for the Olympia convention centre in London, which it hopes to develop into a rival to venues such as The O2 and Wembley Arena.