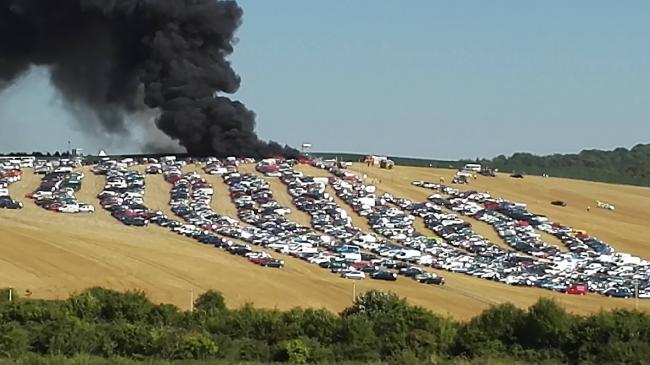 Boomtown Fair in Hampshire, UK, is the second reported festival to be hit with a fire in the car park following a similar event at Andanças Festival in Portugal on August 3rd.

On Friday afternoon, a large blaze started in the car park at Boomtown Fair, destroying 80 vehicles. No injuries have been reported.

It’s believed that the fire was started by a cigarette left unattended.

The event’s campsite was evacuated as a precaution, and an incident information tent was set up to provide those affected with support.

Festival representative Adrian Coombs told the BBC they provided internet access and phone lines to make sure customers could contact insurance companies during the festival, as well as helping them get home after the event.

Over 60,000 are thought to have attended Boomtown, which was headlined by Damian Marley, Madness, Leftfield and Levellers.

Earlier in August, 422 cars caught ablaze in the parking lot on the third day of dance and music event Andanças Festival in Castelo de Vide.

No serious injuries were reported, but three people were assisted by medical staff on site, with two admitted to hospital after inhaling flames.

At Andanças, the Agricultural Credit Insurance has assured that it will fulfil its responsibilities according to the deal it agreed with the festival, reports DN. What those responsibilities will be is dependent on the cause of the fire, which has not yet been found.

Those affected with car insurance have been encouraged to contact their individual providers to find out if fire coverage is included. If policies do not, advised the Portuguese Association for Consumer Protection, drivers will have to wait until the liabilities are cleared.

Boomtown was further hit by tragedy on Monday after festival-goer Olivia Christopher, aged 18, was found dead in her tent. She’s the fourth person to have died at the event during the festival’s seven years in existence.

Reads a statement from Boomtown: “We are absolutely devastated with the news that a festival attendee has tragically passed away.

“Our thoughts are with the young lady’s family, friends and loved ones and we are currently doing everything that we can to support her friends here at the festival with teams on the ground and welfare staff helping anyone affected.

“We are now assisting the police, offering our full support, as they carry out a full investigation.

“Public safety is at the heart of our event management planning and a full review into the events that have taken place over the weekend will be conducted.”