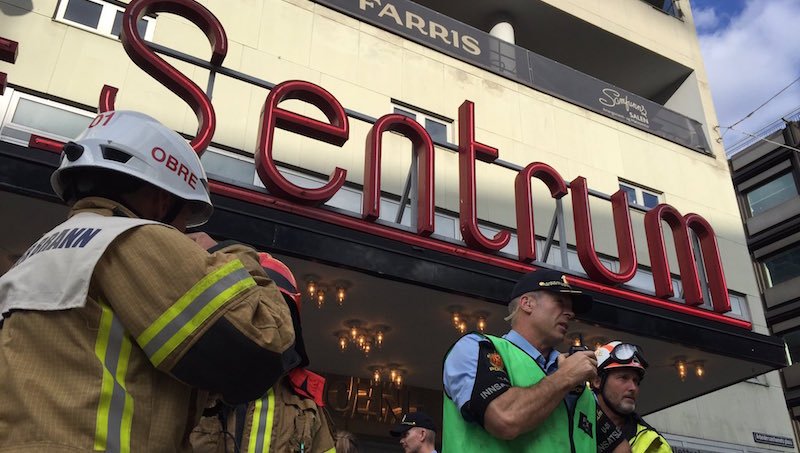 A fire brigade spokesman speaks to press outside the venue

The 1,750-capacity venue was hosting a show by American DJ Steve Aoki – part of a freshers’ week event organised by the BI Norwegian Business School – when a roughly 1sqm (10.7sqft) part of the ceiling came away, showering students in chunks of plaster and concrete.

Police believe the collapse was caused by the lighting rig making contact with the ceiling, reports Norwegian tabloid Verdens Gang, although a spokeswoman declined to confirm or deny the reports, telling IQ the venue is “still awaiting more information on what happened and why”.

She adds that, “as far as we know, no one was seriously hurt, thankfully”.

A Daglabet video shows the damage to the ceiling and rubble on the floor:

In a statement, Sentrum Scene said it is “terribly sorry” for the accident and offered its thoughts to those “touched by the accident and to the students who where attending what was supposed to be a nice and positive event”.

Yngve Kveine, BI’s communications director, says the university is “relieved that the damage was not more serious”.