145,000 people descended on Rotselaar last weekend, brushing off the threat of terror to (to quote Macklemore) come together and celebrate the music 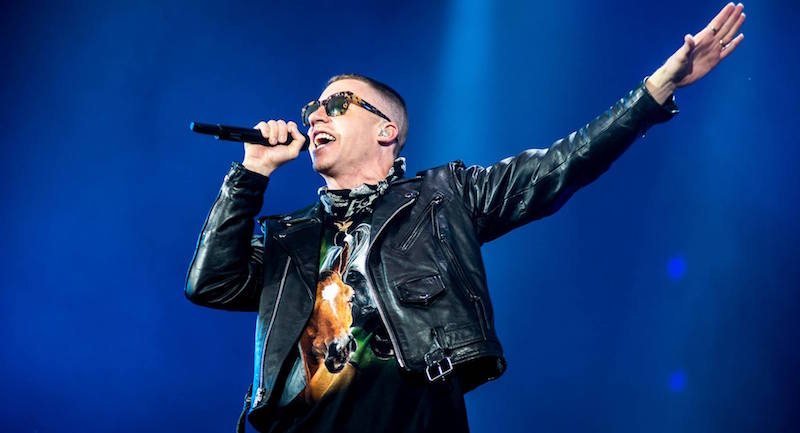 Macklemore and Ryan Lewis captured the mood of Rock Werchter during their Sunday night slot at the long-running Belgian festival, delivering a defiant ‘up yours’ to both the terrorists who bombed Brussels in March and those who would seek to capitalise on the tragedy.

Following Iggy Pop and Beck and preceding headliner Florence + the Machine, the US hip hop duo’s actual set drew a mixed reaction (Belgian magazine Knack called Macklemore a “white MC Hammer”), but a speech by the rapper, in which he denounced the attacks in Brussels, Paris and Orlando and those who would “provoke and disturb the natural state of peace the Earth should be in”, struck a chord with the crowd.

“Those people who created those vicious attacks, those acts of terrorism; those people represent themselves. They do not represent a religion. When we congregate like this as a world community and celebrate music, it is a testament that hatred and fear will never be able to overpower love.”

“Due to the inclement weather and the terror alert, this edition of Rock Werchter has been the toughest to organise for 22 years”

With 36 of Werchter’s 75 acts being British, including Thursday headliner Paul McCartney, Friday headliner Editors and Sunday’s top billing, Florence + the Machine, many also took the opportunity to address the UK’s voting to leave the EU on 23 June. Richard Hawley said he and his band are “of Sheffield, we are English and we are European and proud”, while PJ Harvey mourned that “England’s dancing days are done” and Ricky Wilson of the Kaiser Chiefs managed a quick, “Sorry about that Brexit, by the way!”.

IQ previously reported that Werchter, promoted by festival founder and Live Nation Belgium head Herman Schueremans, was along with other Belgian festivals suffering a slowdown in ticket sales as foreign visitors stayed away following the bombings, even with thorough bag searches designed to put visitors’ minds at ease. The final attendance figures were down 4,500 on last year, with the number of weekend tickets falling 67,500 to 60,000 but day tickets growing from 82,000 to 85,000 (for 145,000 visitors in total – still the festival’s third-best visitor total since it began).

Even with the slight fall in sales, Schueremans tells IQ he was happy with this year’s event – Rock Werchter’s 42nd – “despite the weather”. The festival was one of the wettest on record, with the site flooded beforehand and heavy rain throughout the weekend, forcing Schueremans and his team to bring in more than 5,000 tons of sand and 20.000m³ of bark to dry out the site.

Rotselaar mayor Dirk Claes praised the promoter for his handling of the flooding. “Due to the inclement weather and the terror alert, this edition of Rock Werchter was, of the 22 I’ve been [been mayor for], the toughest to organise…

“I want to give a big compliment to the organisers, all the relevant agencies such as [public-transport company] De Lijn and the many volunteers for all the efforts they have made to bring this [festival] to a successful conclusion.”