A deposit system led to the vast majority of cups being returned and tents taken home, while food concessions adhered to environmentally friendly guidelines 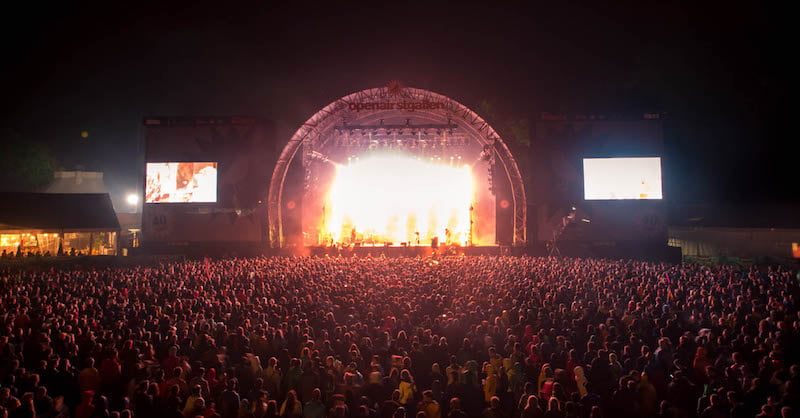 The 40th edition of OpenAir St Gallen was the greenest yet, with a deposit system for tents and cups and a partnership with the myclimate non-profit paying environmental dividends for the Swiss festival.

Festivalgoers paid a deposit of 2 SFr. (£1.58) for cups, the majority of which was refunded after 93% of cups were returned. Those camping also had to put down 20 Fr. as a tent deposit, of which 85% was refunded for tents taken home after the event.

The ‘home delivery’ service also returned, allowing attendees to have beer delivered to the campsite for the same price as in supermarkets. With the festival fully cashless for the fourth year, all payments were taken from RFID wristbands.

The festival therefore committed to regional, sustainable menus – including vegetarian options – using fair-trade ingredients and Swiss meat from sources complying with animal welfare guidelines. “We wanted to give our stand operators a tool allowing them to be more sustainable and align their products and offers with the spirit of OASG,” explains the festival’s head of sustainability, Michaela Tanner.

A total of 110,000 people (20,000 on Thursday, 30,000 on Friday, Saturday and Sunday) attended OASG 2016, held near St Gallen in eastern Sweden last weekend. Headliners were Radiohead and Mumford & Sons, with other performers including Nathaniel Rateliff & The Night Sweats, Years & Years, Nothing but Thieves, Rhodes, Blossoms, Wolf Alice, Rag ’n’ Bone Man and Tom Odell, who filled in for Jess Glynne after she pulled out.