FKP Scorpio was forced to axe its first festival in 25 years after Southside was hit by severe downpours and winds of over 60mph, with Hurricane also affected 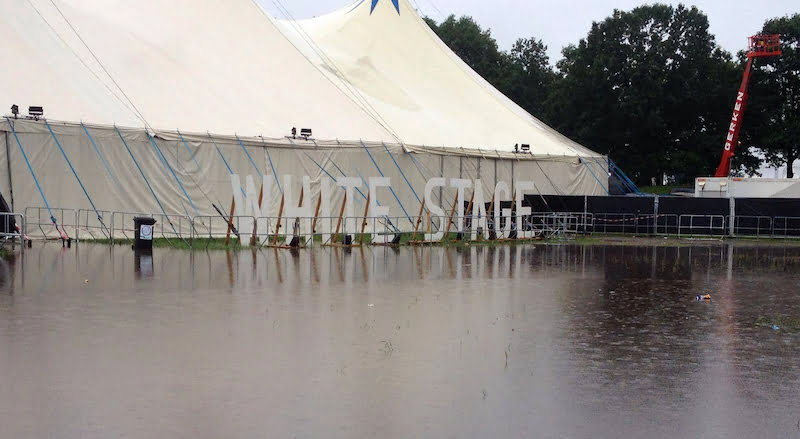 The White Stage becomes the Wet Stage at Hurricane 2016

It was a nightmare weekend for FKP Scorpio after severe storms forced the partial cancellation of two of its German festivals.

Sister events Southside and Hurricane – which take place nearly 500 miles apart, in Tuttlingen and Scheessel, respectively – were both affected by inclement weather, with Southside the worst hit: FKP Scorpio CEO Folkert Koopmans tells IQ the site was underwater by Friday night, “with all the offices flooded, the backstage area flooded, the stages damaged, all the bars damaged…

“I had never in my life seen rain that heavy, and everyone was saying that.”

The decision was made to cancel the final two days of Southside in the early hours of Saturday morning (Rammstein headlined Friday 24 June, which went ahead as planned), by which time everyone had been evacuated in buses or in shared cars.

It is the first time in his 25 years running FKP Scorpio that Koopmans has had to cancel an entire festival, he says.

Hurricane, meanwhile, was reduced to a two-day event, with Saturday called off but Sunday going ahead as planned.

Koopmans wouldn’t be drawn into specifics as to the economic impact of the cancellations, but did say it was “huge”. “We have to check everything now,” he says, “and there’s stuff popping up all the time which we think, ‘Oh, shit, that’s damaged…'”

Koopmans adds that while it’s “too early to say” about anything the promoter may do differently next year, he is mulling over whether it might be better to combine the car park and campsite for easier access to cars in the event of similar severe weather next year. However, there are “security reasons” for not doing so, Koopmans says, as festivalgoers “usually drink a beer, and then a few more, and if the car is next to the tent they [might] start doing stupid things like driving around, so that’s why we split it now”.

“You also need more space if you want to do that,” he continues, “but that’s the only thing I can think of that we may want to rethink our position on.”

As for refunds for disappointed Southside-goers, Koopmans emphasises that while the company still “need[s] to evaluate everything”, “we want to keep the fans happy, so we’ll try to find something for them”.

Refunds are currently being sought by 21 people who attended Rock am Ring, which was similarly called off earlier this month after the site was hit by freak weather which saw over 70 people struck by lightning.