Ticketfly, owned by the US internet radio giant, has consolidated its presence in Chicago by becoming exclusive ticketer for the Riviera, Vic and Park West 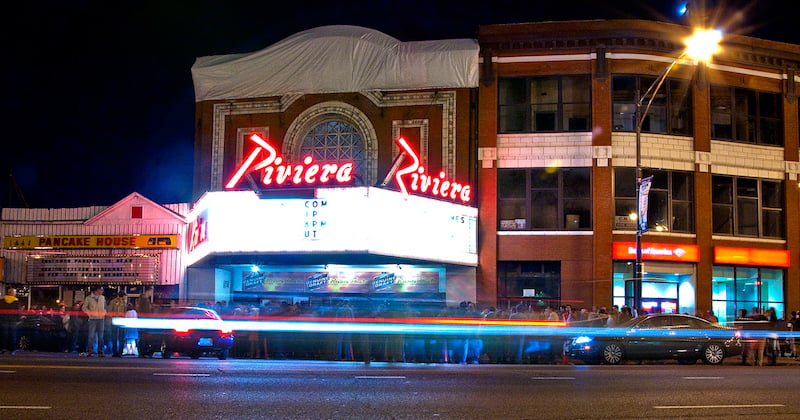 The Riviera ahead of a Hot Chip show in 2010

Is it the second major signing for the fast-growing ticket outlet in as many months: in late April the company, owned by internet radio/streaming service Pandora, lured The Bowery Presents’ Bowery Ballroom and Mercury Lounge away from Ticketmaster.

In addition to taking over ticketing duties for the 2,500-capacity Riviera Theatre, 1,400-capacity Vic Theatre and 900-capacity Park West, Ticketfly will handle “select Jam events throughout the midwest”. (Upcoming Jam shows include Adele at the United Center, Alabama Shakes at the Aragon Ballroom and Wilco at Hall’s Island.)

The three venues previously had a partnership with Etix.

The ticketer now has a presence in America’s three major ‘music cities’ – Chicago, New York and Los Angeles – and Ticketfly’s Rachel Durfee says the company is “making an aggressive move upstream into larger venues and promoters… we’re going after the incumbents, hard.”

Ticketfly also added 48 new venues and promoters to its Canadian roster in January with the acquisition of ticketing system developer TicketBreak.

“Each new deal is further validation that bringing live and streaming music together under one roof is a win-win-win for fans, artists, and promoters,” says Sara Clemens, Pandora’s chief operating officer. “We’re helping venues and promoters book the right talent, promote their events, and build their brand and audience – ultimately helping them to sell more tickets and make more fans happy.”

Despite outwardly going from strength to strength, there are signs that all is not well at Pandora: its stock has been on a downward slide since 2014, and many are questioning whether its spending plans are sustainable. Last month its biggest investor, Corvex Management, said Pandora is “pursuing a costly and uncertain business plan, without a thorough evaluation of all shareholder value-maximising alternatives” and criticised what it called “questionable capital allocation decisions”.