VenuesLive, which also manages Sydney's AMZ Stadium, will handle the day-to-day running of the 60,000-capacity facility when it opens in 2018 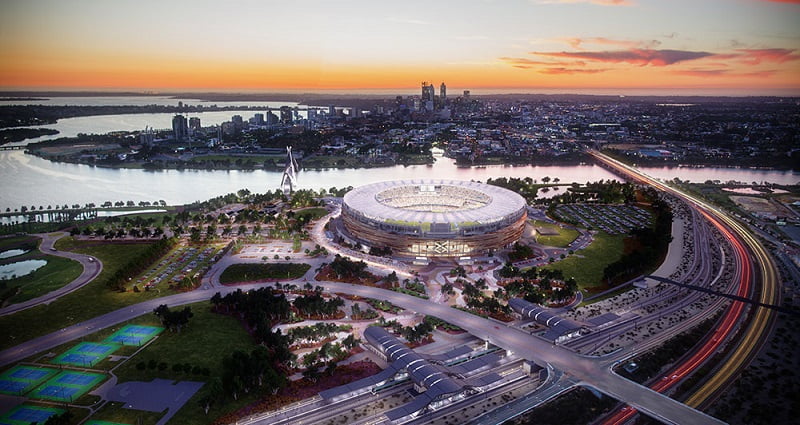 An artist's impression of the completed stadium

The government of Australia has appointed an operator for the 60,000-capacity Perth Stadium ahead of its opening in early 2018.

VenuesLive Management Services (formerly Stadium Australia Operations) – which currently manages the ANZ Stadium (cap. 83,500) in Sydney Olympic Park – has committed to an average of 40 events a year at the new stadium for an initial five-year term, with the option for the Western Australia (WA) state government to grant an additional five-year extension.

WA sports and recreation minister Mia Davies says VenuesLive will “now enter into negotiations to finalise user agreements with football and cricket, while talks would also be progressed with other potential users such as Australian Rugby Union and Football Federation Australia, English Premier League clubs, concert promoters [and] a range of community arts and smaller sport event owners”.

“VenuesLive will now enter into negotiations with potential users, including sports clubs and concert promoters”

The ANZ stadium has hosted shows by Eminem, the Bee Gees, U2, AC/DC and Taylor Swift, who stopped there in November on her record-breaking 1989 world tour.

The Perth Stadium is 40% complete and expected to open on time for the start of the 2018 Australian Football League (AFL) season.

There are no stadia of a comparable size in Western Australia – the Domain Stadium in Subiaco, Perth, is the Perth Stadium’s closest rival with a capacity of 43,500.