The anti-EU music festival/political rally was sunk by a "spiteful vendetta" by the Electoral Commission, according to organiser Leave.EU 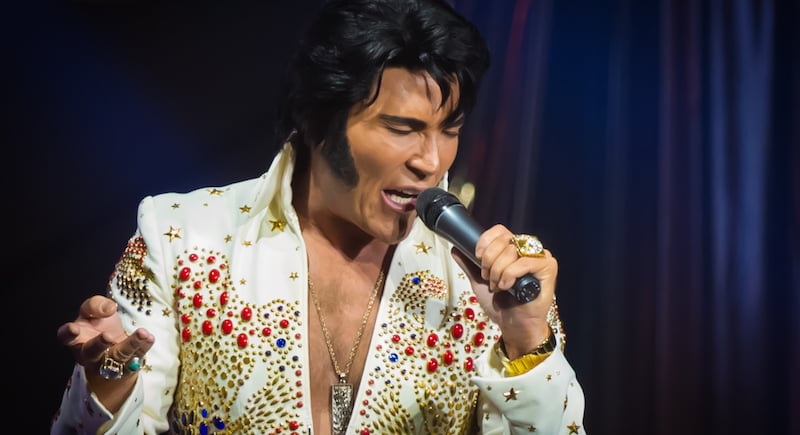 Elvis Presley impersonator Gordon Hendricks, who was due to perform at bpopLive mkIII

Andy Wigmore, Leave.EU’s director of communications, says: “This promised to be a truly unique event, with a live orchestra, a little tongue-in-cheek entertainment and speeches from Nigel Farage and other leading lights of the leave campaign.

“It was intended as a huge and well-deserved ‘thank you’ to all of our supporters; a celebration of their extraordinary efforts in this referendum.

“But the Electoral Commission, which has been pursuing a spiteful vendetta against us since we reported their crooked activities during the leave campaign designation process to the Treasury Select Committee, has decided to shut us down.”

Wigmore says that “after insisting we tick all sorts of superfluous boxes and fill in various time-wasting forms in triplicate”, the elections watchdog issued a “final demand for more information”.

He adds: “Despite our best efforts, the constant pressure and repeated threats have finally killed off what should have been a great event for our dedicated and hard-working supporters.”

However, an Electoral Commission spokesman says: “The commission has not requested or suggested that the event cannot or should not take place. As part of the commission’s monitoring we identified an event that had it proceeded would need to comply with the rules on referendum campaign spending.

“The Electoral Commission, which has been pursuing a spiteful vendetta against us since we reported their crooked activities to the Treasury Select Committee, has decided to shut us down”

“As we would in any such matter, we contacted the event organisers regarding the costs and administration of the event and have been awaiting a response to outstanding queries on this. It is important that the campaign spending rules are followed properly.”

Leave.EU’s campaign chief, Arron Banks, said around 8,000 ticketholders will be offered a refund or allowed to attend a postponed concert in September in aid of his Love Saves the Day foundation.

Drum and bass band Sigma, electro-swing group The Electric Swing Circus, dance duo Phats & Small and UK garage act DJ Luck and MC Neat were originally due to perform at the original bpopLive before it collapsed after Sigma said they are “in no way supporting the event” and DJ Luck and MC Neat stating that they “didn’t even know it was about that [Brexit] to be honest”.

bpopLive 2.0, too, fell apart in the space of 24 hours after losing Alesha Dixon, Sister Sledge, 5ive, East 17 and Rose Royce’s Gwen Dickey. Dixon’s manager said “Alesha has no political allegiances either way on this issue”, while a statement from 5ive read: “When Rich and Scott agreed to play the event they understood that it was a pop concert funded by one of the Brexit organisations and not a political rally.”

IQ asked European live music professionals for their predictions on how the industry might look following Brexit, or Britain’s exit from the EU, in March.