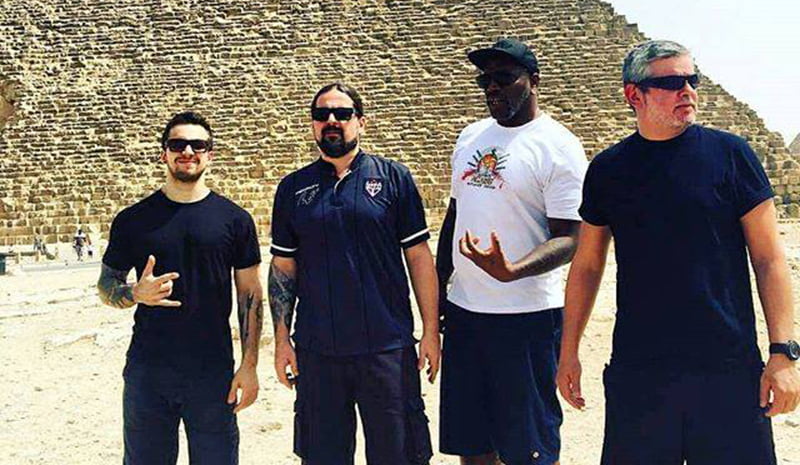 Sepultura in Egypt before the ill-fated show

An Egyptian musician and concert promoter was arrested on Saturday night after police shut down a “satanic party” in Cairo featuring Brazilian death metal band Sepultura.

Witnesses reported that Nader Sadek and two other people, including the owner of the villa where the concert was taking place, were taken into custody and interrogated after police, acting on instructions from the National Defence Council, raided the concert, at which Sadek and other local acts were also due to perform. Giza police chief General Khaled Shalaby said his force received a tip-off that around 60 people were preparing to attend a “satanic” event in Sheikh Zayed, in the Cairo suburbs.

Controversial Egyptian Musicians Syndicate head Hany Shaker, who was initially reported to have stood down after the backlash to a similar controversy involving Sadek in March, stated on Egyptian state TV that “the devil worshippers [Sepultura fans] were dressed in a very weird style and drew their makeup in the shape of a pentagram” and “wore leather jackets with stars on the back, and that is strange.”

“The devil worshippers wore leather jackets with stars on the back, and that is strange”

However, it seems the various Egyptian authorities hadn’t got their stories straight: Ahmed Hegazy, head of the Giza Security Directorate, said the main reason for the cancellation was a lack of proper permits.

Sadek confirmed to IQ on Tuesday 7 June that he had been released from custody.

The show would have been Sepultura’s first in Egypt. Early on Saturday, the band wrote on Facebook: “Cairo, let’s make history tonight!”