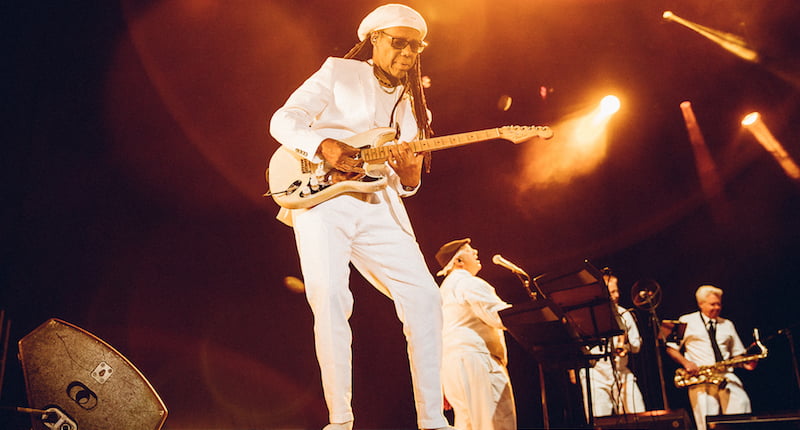 For Glastonbury-goers apprehensive about the mud, traffic congestion and threat of further rain awaiting them at Worthy Farm this weekend, promoter Rob Hallett has a solution: Go to FOLD Festival instead!

Hallett’s Robomagic announced this afternoon that all Glastonbury Festival ticketholders who all “can’t face the thought of battling the elements” in Somerset this weekend can exchange their tickets for a weekend pass to the Niles Rodgers-curated festival at Fulham Palace – along with Robomagic’s Caught by the River Thames, the first festivals to ever be held at the palace in its 750-plus-year history – instead.

“FOLD Festival is tent-free and promises that its guests will be mud- and rain-free, with a dry weather forecast for the whole weekend”

FOLD (or ‘Freak Out Let’s Dance’), headlined by Labrinth, Beck and Rodgers’s Chic (pictured), promises that its guests “will be mud- and rain-free, with a dry weather forecast for the whole weekend”.

Those tempted by the offer – and who are happy to take the financial hit: day tickets for FOLD start at £54 (£162 for the weekend), while a three-day Glastonbury pass would have set you back £228 – should simply arrive at the FOLD Festival box office and exchange their Glasto ticket for a FOLD one “on the day(s) of your choice”.

IQ spoke to Hallett in January about the securing of Fulham Palace as a venue, which Hallett he described as “an amazing coup”, especially in light of its being that rarest of things: “a new site in central London in 2016”.