Use of MDMA, designer drugs on the rise in Europe

As EDM festival promoters grapple with how best to prevent drug deaths at their events, a new EU report reveals the true scale of rave favourite ecstasy's second wind

The use of MDMA – the drug of choice for many ravers and one frequently blamed for the spate of deaths currently plaguing the dance music scene – is on the rise in Europe, reflecting a resurgence in popularity for a drug whose prevalence had previously been on the decline from peak levels in the early-to-mid-2000s.

According to the European Monitoring Centre for Drugs and Drug Addiction (EMCDDA)’s 2016 European Drug Report, 2.1 million European Union (EU) citizens aged between 15 and 34 used MDMA (ecstasy) in 2014: an increase of 300,000 on the previous year.

The Netherlands, long Europe’s leading manufacturer of MDMA, seized 2.4m ecstasy tablets in 2012, and although there is no data available for 2014, “if a similar figure is assumed for 2014” EMCDDA estimates that “around 6.1m MDMA tablets were seized in the European Union in that year” – more than double the amount of seizures in 2009. 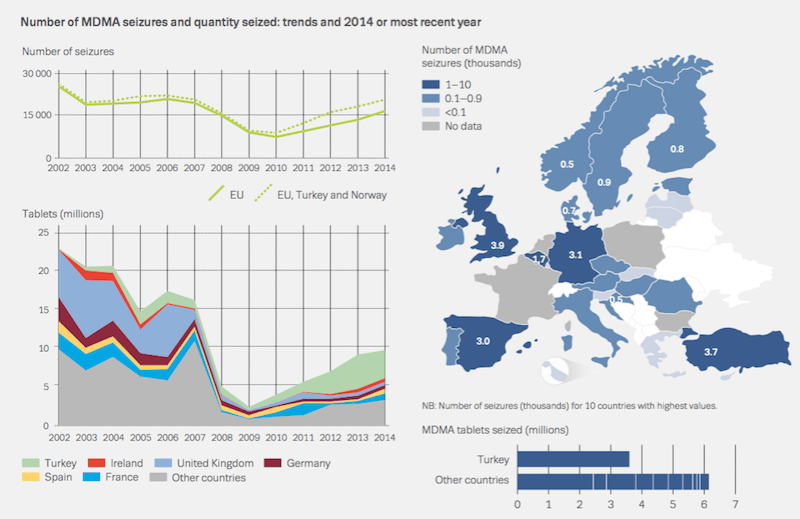 The EU is also seeing a rise in the number of high-potency ecstasy pills “after a period when reports suggested that the majority of tablets sold as ecstasy in Europe contained low doses of MDMA or none at all,” the report says. “Reports indicate an increased availability both of high-dose MDMA tablets and of MDMA in powder and crystal forms.”

EMCDDA expressed concern about MDMA producers’ “use of sophisticated and targeted marketing” and production of “high-dose powders, crystals and tablets with a range of logos, colours and shapes” to give the impression of quality “after a lengthy period in which poor drug quality and adulteration had resulted in a decline in use”.

Use of new designer drugs, such as those responsible for the deaths at Time Warp festival, is also on the rise as their numbers continue to grow

“There are signals that this may be achieving some success,” it said, “with indications that MDMA is becoming more popular, both with established stimulant consumers and with a new generation of young users.”

Many recent festival deaths, such as those at Time Warp in Argentina in April, came after victims ingested MDMA laced with an unregulated designer drug, or ‘new psychoactive substance’ (NPS). Use of NPSes, many of them legal, is also on the rise as their numbers continue to grow (although legislation such as the UK’s new Psychoactive Substances Act – a blanket ban on any psychoactive drugs that aren’t “food, alcohol, tobacco, nicotine, caffeine and medical products” – should bring the numbers down in 2016): In 2015, 98 new substances were detected for the first time, reports EMCDDA, bringing the number of new substances monitored to more than 560, of which 70% were detected in the last five years.