The new-look AC/DC have the "potential to be one of the touring hits of the summer", says one of a host of positive reviews after their first concert 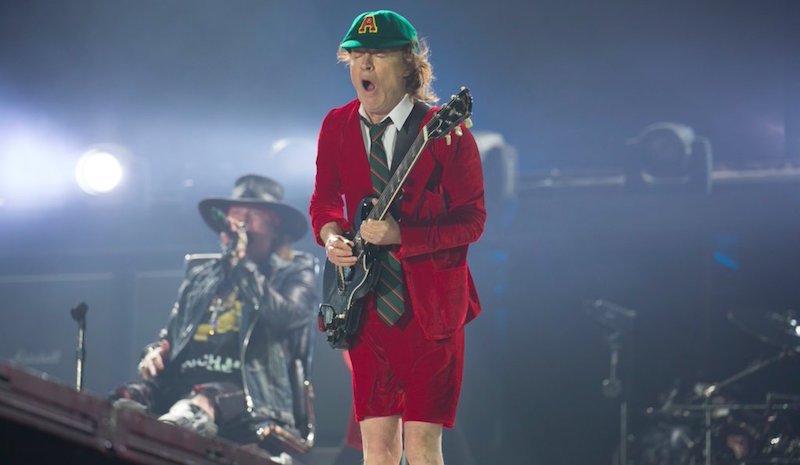 AC/DC fans considering asking for a refund for their Rock or Bust tour tickets following the recruitment of Guns N’ Roses’ Axl Rose to replace out-of-action lead singer Brian Johnson may want to think twice, because the first reviews are in – and it’s looking good so far.

Rose, who recently played Coachella with Guns N’ Roses and will tour with a line-up also including original members Slash and Duff McKagan this summer, made his debut with AC/DC at the Passeio Marítimo de Algés in Lisbon on Saturday (7 May).

Michael Hann, writing for The Guardian, praised Rose’s “masterly first appearance fronting AC/DC”, and said that though he sounds more confident on the Bon Scott-era songs – Johnson’s tunes “are delivered just fine, but there’s a slight sense he’s being a little too reverent” – the new-look AC/DC is a “triumph” that “does exactly what one would expect, but rather better than one had dared hope for”.

“A rare downside”, said Hann, was that Rose, who was seated for the concert after having recently broken his foot, “look[ed] for all the world like a hard-rock Davros” in his black leather throne.

Rolling Stone’s Mark Sutherland agreed that on recent material Rose “seemed unsure of whether to stick to his own trademark wail or give it more Johnson-esque rasp”, but “still seemed to be reaping the rewards of what he has joked were his first-ever proper rehearsals”.

Sutherland compared the union of Rose and AC/DC to poorly received superhero blockbuster Batman v Superman: Dawn of Justice, writing that “this monster mash-up of classic rock megabrands avoided becoming the Batman v Superman of hard rock (ie., loud, flashy but ultimately empty); instead, the Lisbon performance hinted at the new union’s potential to be one of the touring hits of the summer – assuming Rose stays under control and AC/DC avoid any further mishaps”.

Fan response was, on the whole, positive (although that’s to be expected considering those who were there had decided against accepting a refund when Rose replaced Johnson): “Axl Rose has a lot of respect for the group and he has the voice for it,” 48-year-old Paulo Dias told Sky News after the show.

However, there were dissenting opinions: “Axl Rose is nothing like Brian Johnson,” said Marcos Vizoso, 44, who had brought his 10-year-old daughter to the show. “I wanted her to see the original band.”

Watch AC/DC performing ‘Shoot to Thrill’ from Saturday’s concert below:

2 responses to “Axl Rose and AC/DC: A “masterly first appearance””