As the 'concert of the century' sells its entire ticket inventory in under three hours, has Goldenvoice just invented the perfect festival formula? 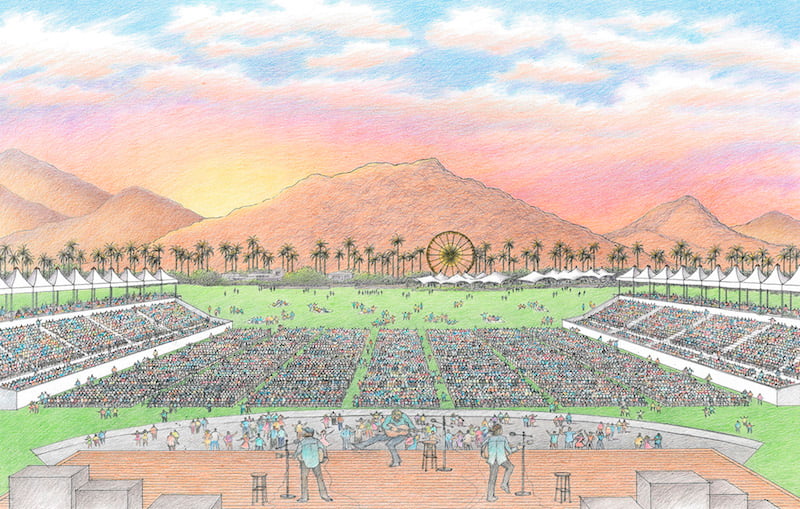 An artist's impression of the Indio, California, Desert Trip site as it will appear in October

Tickets for both weekends of Goldenvoice’s Desert Trip reportedly sold out in under three hours, netting the AEG Live-owned promoter a box-office gross well in excess of US$100 million – the highest ever for a single festival – and no doubt sparking plenty of frantic boardroom meetings at rivals eager to replicate the success of what is being called the ‘concert of the century’.

The ‘megafestival’, originally scheduled for 7–9 October but expanded to a second weekend, Coachella-style, on the day tickets went on sale (Monday 9  May), features a line-up of just six acts, all of whom are at least 50 years into their career, leading some to dub the event ‘Oldchella’. However, the combined pulling power of its sextet of boomer greats – The Rolling Stones, Bob Dylan, Paul McCartney, Neil Young, Roger Waters and The Who – proved irresistible to ticket-buyers, with fans from the Americas, Europe and further afield snapping up every ticket and surely leaving open the prospect of events with a similarly prestigious billing in future.

While Goldenvoice did not respond to IQ’s requests for comment, sources tell Billboard that Desert Trip’s overall box-office gross is expected to top $150 million, and that AEG/Goldenvoice is “ecstatic” about the event’s success. By comparison, Coachella, also promoted by Goldenvoice, made $84.26m over two weekends in 2015.

Wherever Desert Trip’s gross ends up, it’ll be a figure bolstered by packaging hotel stays and VIP experiences with this autumn’s hottest ticket, as well as listing allocation direct on the secondary market.

The hotel packages ranged in price from $2,129 – for two general admission tickets and a stay at the three-star Homewood Suites La Quinta – to $6,709, which includes three nights at the Agua Caliente Casino Resort & Spa and a choice of reserved floor or reserved grandstand seating.

Of course, the headliners needed to gross $150m from a single festival don’t come cheap. One source “familiar with the logistics of booking huge acts” tells The Guardian that Goldenvoice will likely be paying between $6m and $9m to each of the six acts.

In a change to AEG’s traditional secondary ticketing arrangements – the company has had a partnership with eBay-owned StubHub to list tickets from the resale site on its AXS ticketing platform since 2012 – Viagogo serves as Desert Trip’s “Official Premium Seating” partner. Viagogo’s site explains that “Official Premium Passes are being sold directly by the event organiser and are not resale tickets… The price of Premium Passes varies with demand.”

Tickets advertised on the platform are now roughly three-times the face value. Prices for weekend one and weekend two tickets listed on Viagogo start at £1004 (roughly US$1,455) for floor seating passes (or £1,454 for the front blocks), £1,454 ($2,105) for grandstand seating and £1,485 ($2,150) for pit standing tickets. While not official secondary partners, at press time StubHub was advertising 3,400 passes across both weekends, while Vivid Seats is selling three-day passes for weekend two for under $1,000.