The charity dragon boat race will take place on 21 April, ahead of the St George's Day weekend 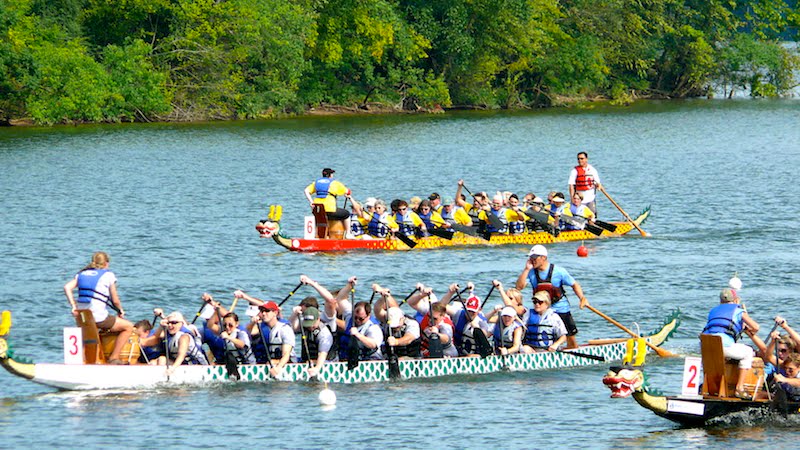 The Isle of Wight Festival and charity partner Stand Up to Cancer will next week host a dragon boat race to raise money for research into new cancer treatments in the UK.

Held on Thursday 21 April, in the lead-up to St George’s Day on Saturday, the race will be the second time a dragon boat race has been held on the Isle of Wight, with last year’s event attracting contestants including Ronan Keating, Shane Lynch, Keith Duffy, Markus Feehily and Nicholas Pinnock and a dragon skull prop from Game of Thrones, purchased by festival promoter John Giddings and placed near the island’s harbour (it’ll return this year).

“We’re delighted to have Stand Up to Cancer on board this year as our national charity partner to help raise funds and awareness for the incredible work they do,” says Caroline Giddings, the festival’s commercial director. “The dragon boat race is the perfect way to launch this exciting new venture.”

Stand Up to Cancer director Claire Rowney adds: “We’re so excited to be partnering with The Isle of Wight Festival this year and to be part of such a special and iconic event. We’ve made amazing progress against cancer in the past few decades but one in two of us in the UK will develop cancer in our lifetime so we can’t afford to stand still. All the money raised through the partnership will go directly to vital research to accelerate new cancer treatments and tests, and ultimately it’ll help save more lives.”

Stand Up to Cancer is a joint venture by Cancer Research UK and broadcaster Channel 4.

Queen with Adam Lambert, The Who (playing their fourth festival) with Richard Ashcroft, Stereophonics and Faithless will headline this year’s Isle of Wight Festival