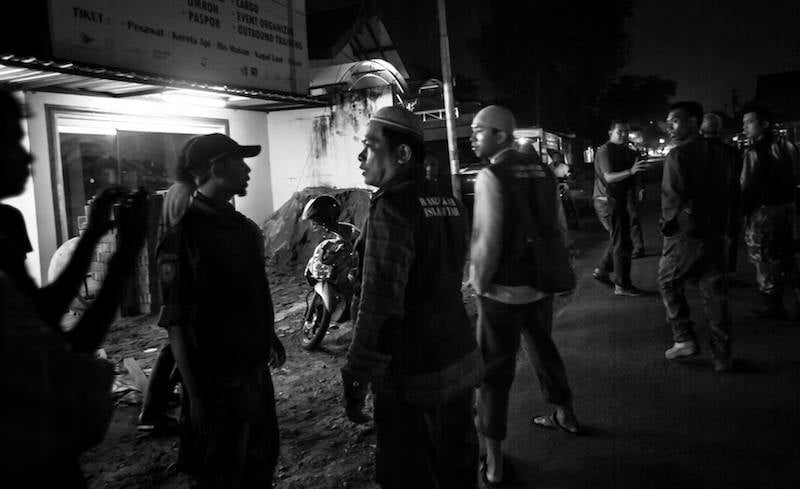 Police face off with the disruptors outside Survive! Garage

Indonesian feminist group Kolektif Betina (‘Female Collective’) was forced to call off the second of its two ‘Lady Fast’ concerts in the city of Yogyakarta after the first, on Saturday (2 April), was disrupted by an “unidentified group” shouting Islamic slogans.

The Lady Fast events, at the Survive! Garage venue, were to have featured live music, workshops, art exhibitions, a market and film screenings, including Ini Scene Kami Juga! (or This is Our Scene Too!), about the involvement of women in Indonesia’s punk scene, which “is still quite minor, because the hardcore/punk scene is considered a man’s world”.

However, at around 10pm, as the final performers took to the stage, a group of men stormed the venue, shouting “Allahu Akbar” (“God is great”) and accusing organisers of “corupting morals, dressing inappropriately [and] being communists,” Kolektif Betina writes on its Facebook page.

“Our other female friends were also verbally assaulted with insults such as ‘Dirty!’, ‘Damaged women!’, ‘You are morally corrupt!'”

“One of our female friends who tried to get out of the crowd was assaulted physically by members of the unidentified group,” continues Kolektif Betina. “She was grabbed and yelled at: ‘Are you drunk?’ Our other female friends were also verbally assaulted with insults such as ‘Dirty!’, ‘Damaged women!’, ‘You are morally corrupt!'”

A warning shot was reportedly fired into the air by a police officer as members of Kolektif Betina were evacuated.

The punk subculture in Indonesia, the world’s most populous Islamic nation, is one of the world’s largest and most vibrant but frequently finds itself in conflict with conservative religious forces, especially in devoutly Muslim provinces such as Aceh, where Sharia law is in force.