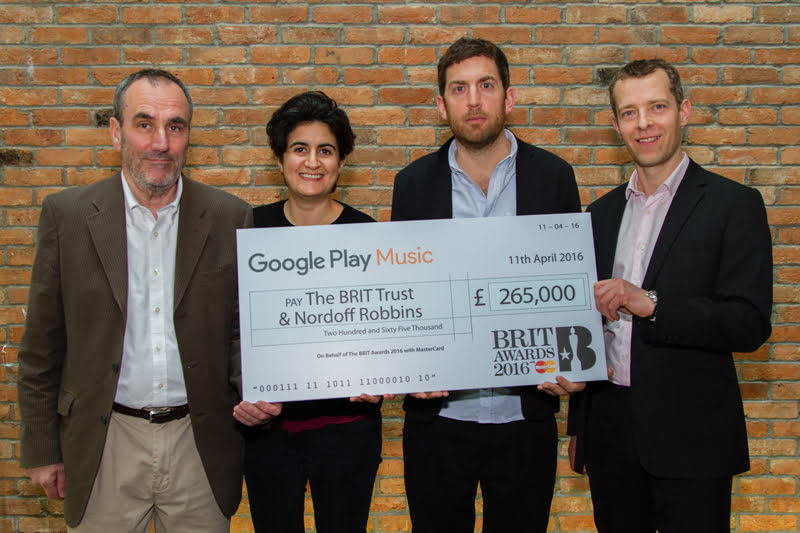 The annual BRITs award show raised an impressive £265,000 for Nordoff-Robbins Music Therapy and the BRIT Trust, in collaboration with Google Play Music as the official audio download and streaming partner, the organisation has revealed.

This sum, which breaks last year’s figure of £250,000, was generated through Google Play Music’s free-to-consumer downloads and audio streams of the live performances from this year’s BRITs, including Adele, Justin Bieber, The Weeknd and Coldplay.

The BRITs has now contributed £16 million to fund and promote education, therapy and wellbeing through music.

It wasn’t only the live performances on the night that helped raise money for the event’s charity partners; BRITs Week held fundraising gigs together with O2 in the lead up and saw a massive contribution of over £500,000 to War Child, thanks to artists including Jack Garratt, Bring Me The Horizon, Public Service Broadcasting, Florence + The Machine, Bloc Party, Jamie xx and Coldplay.

“It’s wonderful news that this year’s BRIT Awards and BRITs Week provided the platform to raise well over three quarters of a million pounds for Nordoff-Robbins and War Child,” says Geoff Taylor, chief executive of the BPI and BRIT Awards.

He adds, “All of us want to thank the fans and viewers for supporting the awards so strongly this year. Many people do not realise that the BRITs, through its charitable arm The BRIT Trust, has now contributed £16 million to fund and promote education, therapy and wellbeing through music.”