Telenovela star/tween phenomenon Violetta has become a global touring sensation. Eugenia Durante finds out the secrets to the winner of our 2016 award for Best in Show… 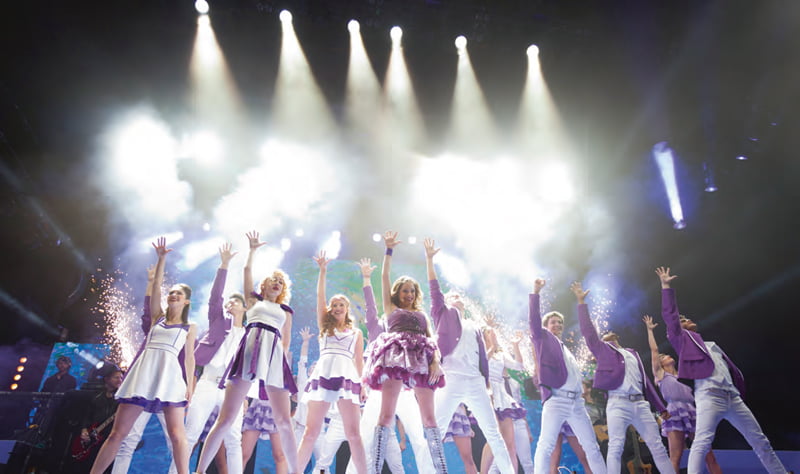 With 367 performances in 26 countries throughout South America and Europe between July 2013 and November 2015, and with around 2.2 million tickets sold, it’s no wonder that Violetta Live scooped this year’s Best in Show award. Such statistics would please the team behind a world-class pop star, let alone a family show targeting kids and teens. Nevertheless, the Argentinian Disney concept has managed to win Europe over with its young cast and amazing production.

Originally a Spanish soap opera that was filmed in Buenos Aires, Violetta was co-produced by Disney Channel Latin America (LATAM) and Disney Channels Europe, Middle East and Africa (EMEA). Launched in May 2012, the series was the first collaboration of its kind between Disney LATAM and EMEA, and immediately became a huge success, firstly in Latin America and then in south-western Europe (The merchandise range alone runs from clothing and stationery to Easter eggs and scooters).

With a touring staff of 131 people, 80 costume changes, and 8 double-decker buses, Violetta Live toured Europe extensively over a three-year period, becoming one of the most successful arena productions worldwide and a marketing phenomenon

The show follows an Argentinian teenage girl who is typically passionate about music, as she experiences the highs and lows of growing up. Given its immense popularity amongst young girls, it was not long before the decision was made to turn Violetta first into a theatre show and later an arena show. As Alberto Bravo Ruiz of the Spanish company Sold Out explains, “Due to the rapid success of the series in Latin America, Spain and Italy, it was quickly developed into a musical in Argentina to be shown in a theatre with a capacity of 2,500, with text and songs taken from the TV series. Upon its release, it immediately sold-out for many months and therefore, a spin-off of the live show was developed to tour Latin America.”

Working closely with DG Entertainment and Sold Out, in 2013 Disney launched a live show that it had adapted for European tastes and that would meet arena standards, evolving more into a pop-rock show rather than a traditional musical. With a touring staff of 131 people, 80 costume changes, and 8 double-decker buses, Violetta Live toured Europe extensively over a three-year period, becoming one of the most successful arena productions worldwide and a marketing phenomenon.