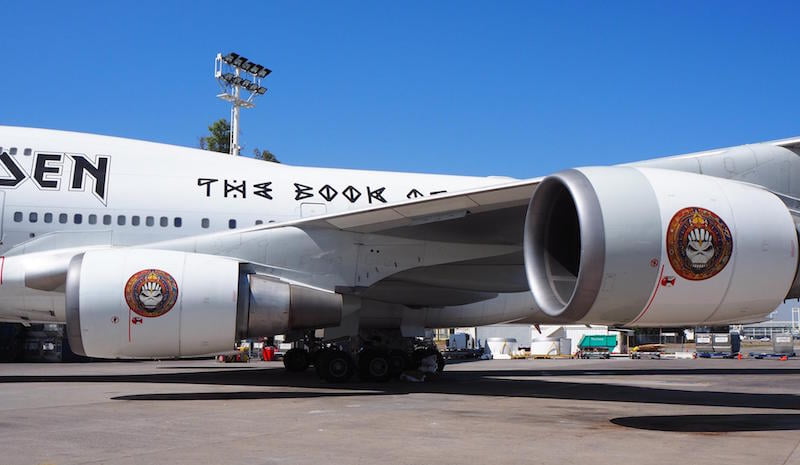 Ed Force One and its shiny new engines in Santiago

Ed Force One, Iron Maiden’s tour bus with a difference, is back in the air today as it rejoins The Book of Souls tour in Brasilia.

The jumbo jet has been out of action since last Monday, when it was damaged in an accident on the ground at Santiago Airport in Chile.

The Boeing 747 flies from Santiago to Brasilia this afternoon, where it will, following the band’s show at the 16,600-capacity Nilsen Nelson Gymnasium arena tonight, be loaded up once again with over 20 tons of equipment, the band and their tour personnel to fly to Brazil for tomorrow’s concert in Fortaleza.

“The speed and thoroughness of this incredibly complex operation was stunning, and we are so very pleased to get our plane back,” said lead singer/pilot Bruce Dickinson in a statement (which also detailed the incredible lengths band, crew and partners went to in order to get the jet kitted out with two new engines): “We would like to thank Air Atlanta [which Iron Maiden lease the plane from] and their terrific rescue team for a fantastic effort in achieving this in the time they did, and to Boeing, LAN Chile. ACS and Rock It Cargo for all their invaluable support. We are sorry, though, for our fans in Cordoba, Buenos Aires, Rio and Belo Horizonte, who missed out seeing the plane, but we hope they enjoyed the concerts as much as we did.

“We are sorry for our fans in Cordoba, Buenos Aires, Rio and Belo Horizonte, who missed out seeing the plane, but we hope they enjoyed the concerts as much as we did”

“We should also thank our Killer Krew, who found themselves at lunchtime on the Saturday of the accident with over 20 tons of equipment at the airport in Santiago and over 60 people all to get to Cordoba for early the next day to set up the huge show we are carrying. The distance is ‘only’ 1,000km, but with a small matter of the Andes in between! They did it, by the skin of the teeth, and all went very well for the show in Cordoba and the other cities EF1 just missed.

“It’s quite a feat of logistics to find and put into action at such short notice all the transport, replacement air-charters, schedule flights, etc., to enable us to play those next four shows on time without EF1 – our transport for everything.”

The Book of Souls tour will leave South America after three shows in Brazil (in Brasilia, Fortaleza and Sao Paolo tonight, Thursday and Saturday, respectively) and touch down in North America in time for an appearance at Madison Square Garden in New York on 30 March.