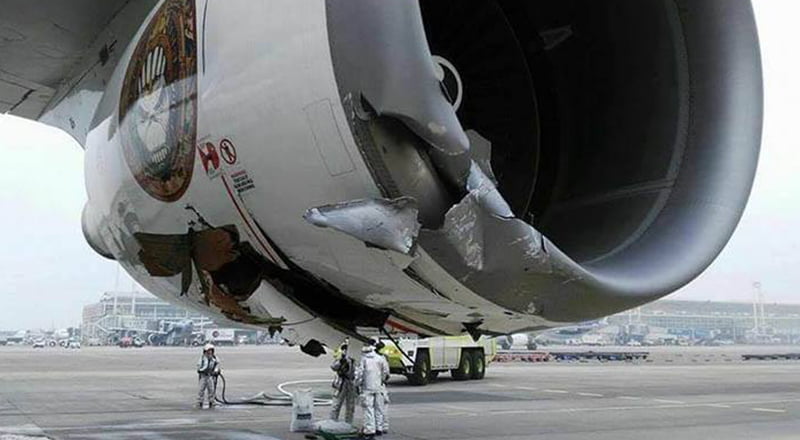 The Boeing 747, piloted on the band’s The Book of Souls world tour by lead singer Bruce Dickinson, crashed into a pushback tractor (tug) on Saturday 12 March following a malfunction of a connecting bolt, damaging both engines and the plane’s undercarriage and injuring two ground crew. None of the band or their crew were on board at the time.

In a statement, Iron Maiden explained:

Ed Force One was this morning tethered to a tow truck to be taken for refuelling prior to flying over the Andes to Cordoba for the next show. On moving, the steering pin that is part of the mechanism that connects the ground tug to the aircraft seemingly fell out. On making a turn the aircraft had no steering and collided with the ground tug, badly damaging the undercarriage, two of the aircraft’s engines and injuring two ground tug operators, both of whom have been taken to hospital. We hope of course that they make a full and speedy recovery and we will be closely monitoring their progress.

The flight engineers are on site and evaluating the damage, but their initial report is that the engines have suffered large damage and will require an extended period of maintenance and possibly two new engines.

Both airport staff will make a full recovery, said Iron Maiden manager Rod Smallwood, and the band are “looking for a replacement 747 Ed Force One while our current beauty is healed”.

The Book of Souls tour is currently in Latin America and will continue on to North America, east Asia, Australasia and Europe, concluding at Wacken Open Air on 4 August.