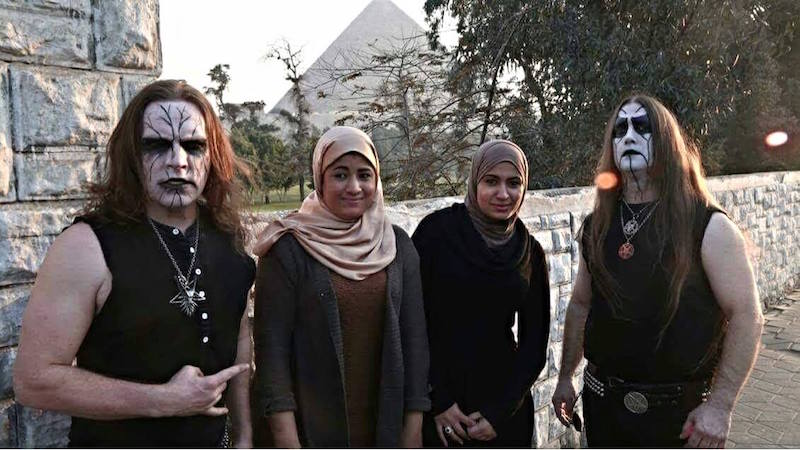 Inquisition and female fans in Egypt

Egyptian singer Hany Shaker has quit as head of the country’s musicians’ union following a media storm over his attempt to shut down a “satanic” metal concert in Cairo.

Shaker told TV host Sayed Ali the concert, by American band Inquisition and Dubai-based Perversion at the Sherazade nightclub on Friday 19 February, was part of a Western conspiracy to spread “chaos and immorality” among young Egyptians.

“The [Egyptian Musicians’] Syndicate foiled an attempt to hold a satanist concert in downtown Cairo,” elaborated Tariq Murtada, a spokesman for the union, speaking to Al Arabiya. “The head of the syndicate, Hany Shaker, advised syndicate officials to observe the concert and alert authorities to the existence of an international devil-worshipping network in order for their concert to be shut down immediately.”

By the time authorities reached the Sherazade, however, the concert had finished.

Shaker was widely criticised for his role in the incident: television personalities Yusef al-Husseini and Yasmin Khatib mocked the Egyptian Musicians’ Syndicate’s comments on air, and businessman Naguib Sawiris, Egypt’s richest man, tweeted: “Could someone please explain to Hany Shaker that black metal has nothing to do with devil worship. Give the youth a break!”

Shaker initially backtracked, telling ONTV’s Youssef El-Husseiny on 22 February that Inquisition and Perversion had simply “put on a concert without permission from the syndicate”. On 24 February, however, he reiterated his moral objection to ‘satanic’ metal, saying: “We are not against the good metal that fits with our society’s religious beliefs and social traditions.”

Dagon, the mononymous frontman of black metal group Inquisition, describes black metal as “music that speaks for Satan” and “Satan expressed through sound waves”, and the band’s lyrics are heavily influenced by the occult and black magic.

Nader Sadek, an Egyptian-American artist who promoted the bands’ appearance in Cairo, tells Daily News Egypt that Shaker and the union were trying to block him holding any more concerts in Egypt. “I’ve had many concerts before at El-Sawy Culture Wheel, which [gets permission] from authorities,” he says, “and not once was I stopped from performing my heavy metal songs.”

Shaker, a popular singer, was elected as the head of the Musicians’ Syndicate in July 2015. In September, the organisation demanded that female pop singers wear “decent, unrevealing clothes during their performances” – a rule described by harpist Manal Mohy El-Din as “so ridiculous that it leaves one speechless”.