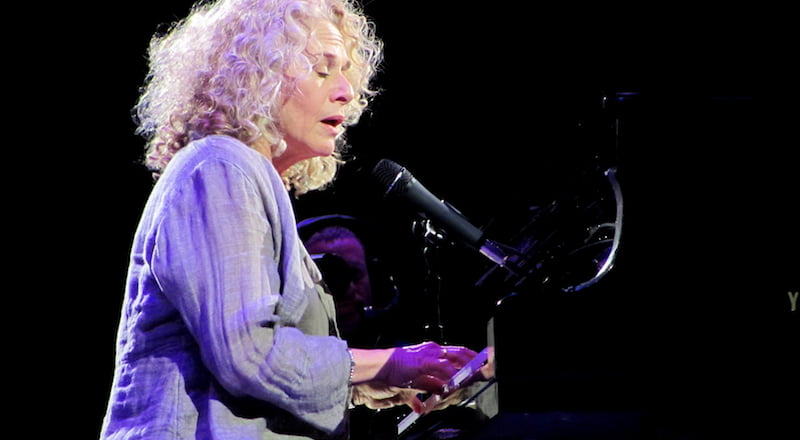 Carole King will play Tapestry in its entirety for the first time this summer.

The 74-year-old will headline AEG Live’s British Summer Time (BST) festival in Hyde Park in London on 3 July, performing all 12 songs from the Grammy Award-winning album, which has sold over 25 million copies worldwide since its release in 1971.

Headliners on other nights are Massive Attack (1 July), Florence + the Machine with Kendrick Lamar (2 July), Mumford & Sons (8 July) and Take That (9 July).

King told BBC Radio 6 Music it “actually wasn’t my idea” to play the album in full, but “no one has ever thought to ask and I loved the the idea.”

“It actually wasn’t my idea, no one has ever thought to ask and I loved the the idea”

“The whole thing is very exciting to me,” she added. “I’m really looking forward to it.”

She added that she’ll be playing other songs, too, “because it would be a very short set if I only did Tapestry. I might actually even have it on my social networks where people can offer up their favourites and see if we can get a consensus and help me figure out which songs to add.”

Tapestry, King’s second album, made her a solo star, although she had already been a hugely successful songwriter for over a decade, penning a string of hits including ‘Will You Love Me Tomorrow’, ‘Take Good Care of My Baby’, ‘The Loco-Motion’, ‘(You Make Me Feel Like) A Natural Woman’ and ‘Pleasant Valley Sunday’ with songwriting partner Gerry Goffin. It spawned the hit singles ‘It’s Too Late’/’I Feel the Earth Move’ and ‘So Far Away’, as well as ‘You’ve Got a Friend’, which became a №1 for James Taylor.