“You have no idea how much I love you”: EODM return to Paris 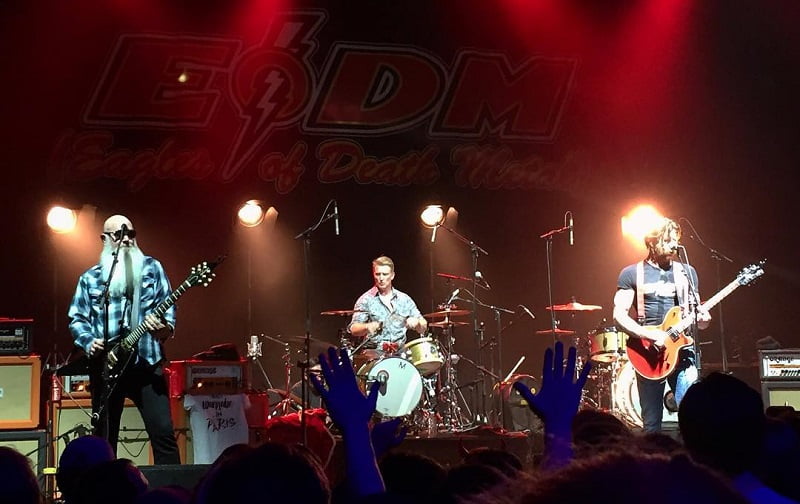 “You have no idea how much I needed you tonight,” said Eagles of Death Metal frontman Jesse Hughes to the crowd at the band’s emotional show at the Olympia Hall in Paris last night – their first since the horrors of 13 November 2015 – “and you did not let me down.”

The concert was cathartic for both band and fans, many of whom were survivors of the massacre at the Bataclan who received free tickets to the gig.

“This is therapy for me… I want to see all those smiles that greeted me in Paris that night, Hughes told AFP before going on stage. “I really need to see those faces smiling again.”

Joining Eagles of Death Metal (including sometime member Josh Homme, who was not at the Bataclan on 13 November) and almost 900 fans at the Olympia were teams of psychologists, on hand to support traumatised audience members, and armed police, who guarded entrances to the venue.

Concertgoers were subjected to three bag and body searches with metal detectors before being allowed to enter.

Frontman Jesse Hughes wept, laughed, danced, smashed a guitar and held hands with a survivor in a wheelchair

According to The Guardian’s Paris correspondent Angelique Chrisafis, who was there, Hughes “alternately wept, laughed, danced, smashed a guitar and held hands with a survivor in a wheelchair after he ran up to the balcony seats” (although he admitted at one point to being so nervous that he’d torn a tendon in his middle finger).

He also brought out a guitar painted in the colours of the French flag, telling the crowd: “You have no idea how much I love you.”

Watch AP’s highlights from the gig – including a raucous version of ‘I Only Want You’, and part of the 89 seconds of silence held to remember the 89 who died at the Bataclan – below.