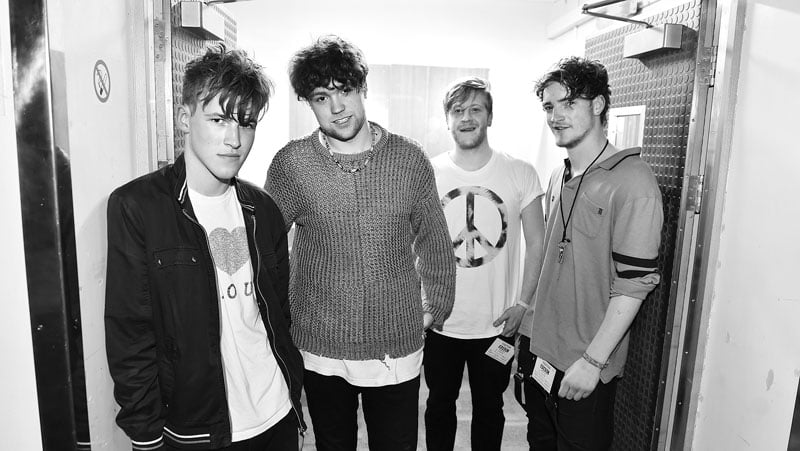 Data from the Official Charts Company shows that the song has gained 30 places since Monday’s chart update. It is already top of the iTunes, Spotify and Amazon charts.

All four members of the British band and their manager were killed in a car accident on Saturday night returning from Norrköping in Sweden, where they had played at FKP Scorpio-backed conference and showcase festival Where’s the Music?.

Footage of their performance at the festival – their first gig outside the UK – was posted to Instagram by postcardpictures on Sunday.

Viola Beach’s label, Communion, has confirmed that all proceeds from the sale of ‘Swings and Waterslides’ – originally released in September 2015 – will go to the families of Kris Leonard, River Reeves, Tomas Lowe and Jack Dakin and manager Craig Tarry.

Liam Gallagher, Kasabian, Tim Burgess, Paloma Faith and Manchester City FC have all voiced their support for the campaign to get ‘Swings and Waterslides’ to number one

Liam Gallagher, Kasabian, The Charlatans’ Tim Burgess, Paloma Faith and Manchester City FC have all voiced their support for the campaign to get ‘Swings and Waterslides’ to number one.

Manchester City fans also paid tribute to fellow supporter Tarry at the club’s match against Tottenham on Sunday with a round of applause in his memory.

Before their deaths Viola Beach were supporting up-and-coming Stockport act Blossoms on their current UK tour. As a tribute, Blossoms have announced that a recording of Viola Beach’s set from the last gig they played together, on Thursday 11 February, will be played at each venue where the band were scheduled to support them:

“The only thing we have got left is for them to make number one,” said Reeves’ stepmother, Sharon Dunne, earlier this week, “because that is their dream.”

Tarry’s father Colin said: “I just don’t want them to die in vain. Go out there and buy their records. Let’s get them to number one.”