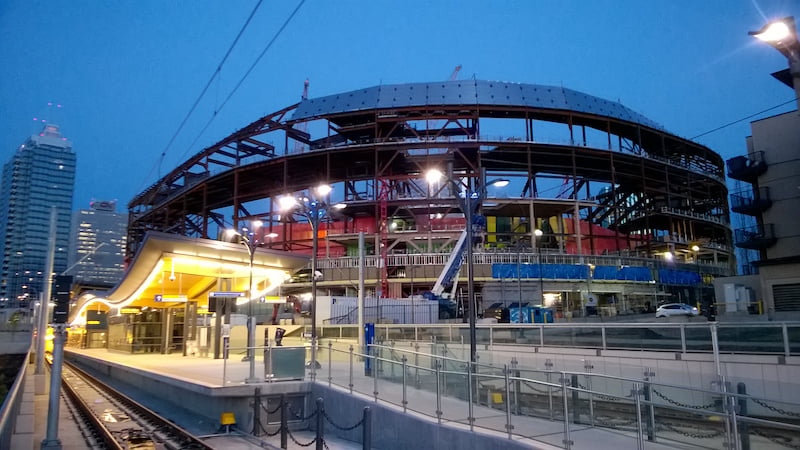 Rogers Place under construction in May 2015

Live Nation Canada has entered into a strategic partnership with Oilers Entertainment Group (OEG), which will operate the 20,734-capacity Rogers Place indoor arena in Edmonton, Alberta, when it opens later this year.

As part of the multi-year arrangement, Live Nation (LN) Canada will become the ‘preferred promoter’ for Rogers Place and its 24,000sqft (2,230sqm) Winter Garden entrance area, and LN-owned Ticketmaster will become the arena’s ticketing provider.

LN Canada will also provide “world-class content, as well as strategic planning, towards the facility’s entertainment strategy”, and the two companies will work together to “expand content and live entertainment opportunities in the [Alberta] region”.

The C$480 million multi-use arena will be, in addition to an entertainment venue, home to the Edmonton Oilers national ice-hockey league (NHL) team.

“We want Rogers Place to be an amazing venue for live entertainment, and Live Nation Canada will help us achieve that goal”

“Our partnership with Live Nation Canada is transformational for Oilers Entertainment Group,” says OEG’s CEO and vice-chairman, Bob Nicholson. “It places Rogers Place in the upper echelon of venues in North America and lays the foundation for future growth.

“We want Rogers Place to be an amazing venue for live entertainment, and Live Nation Canada will help us achieve that goal. This is an important step in OEG’s vision to become a global sports and entertainment leader and we are thrilled to have Live Nation as a partner.”

“As we continue to expand our growth in the region, I am delighted that we have established this partnership with Oilers Entertainment Group ,” adds Paul Haagenson, president of LN Canada. “Aligning our strengths with those of OEG was a natural fit, and we are excited to work with the group to bring an even greater array of performances to the area.”