Counsellors and soldiers on hand for EODM in Paris tonight 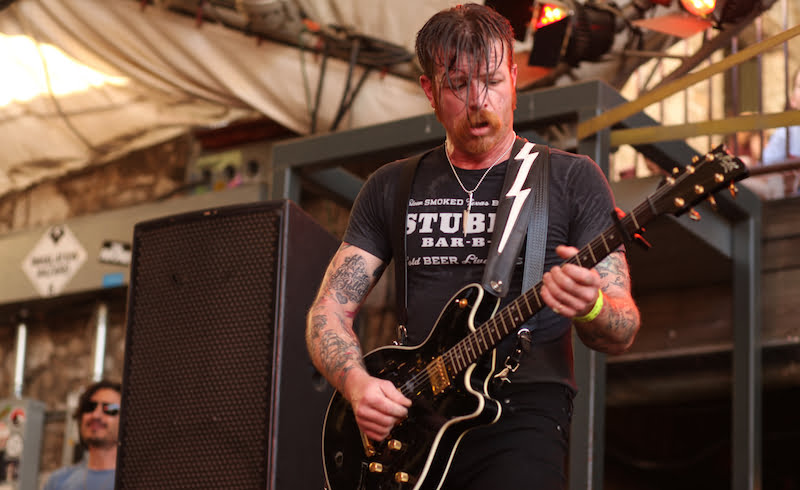 Soldiers and armed police will stand guard when Eagles of Death Metal return to Paris tonight.

Psychologists will also mingle with the crowd to provide support to traumatised survivors of the Bataclan massacre, all of whom were eligible for free tickets to the gig at the 1,996-capacity Olympia Hall.

The Bataclan itself will reopen later in 2016.

In an interview with i-Télé yesterday, Eagles of Death Metal (EODM) frontman Jesse Hughes – a member of the National Rifle Association – was asked if the 13 November attack, which killed 89 gig-goers and the band’s merchandise manager, Nick Alexander, has changed his view on the right to bear arms.

“Did your French gun control stop a single fucking person from dying at the Bataclan?”

It hasn’t: “Did your French gun control stop a single fucking person from dying at the Bataclan?” Hughes said. “The only thing that stopped it was some of the bravest men that I’ve ever seen in my life charging headfirst into the face of death with their firearms.

“I know people will disagree with me, but it just seems like God made men and women, and that night guns made them equal. I think the only way that my mind has been changed is that maybe that until nobody has guns, everybody has to have them.”

EODM’s 23-date Nos Amis European tour began on 13 February in Stockholm and will conclude with two dates in Germany, at the Aladin in Bremen and Live Music Hall in Cologne, on 15 and 16 August, respectively.

Hughes says he feels a “sacred responsibility” to ‘finish’ the band’s interrupted Bataclan show at the Olympia.