The second Where's the Music? showcase festival and conference will tackle litter, gender equality and touring in Scandinavia, and ask what we can learn from Sweden 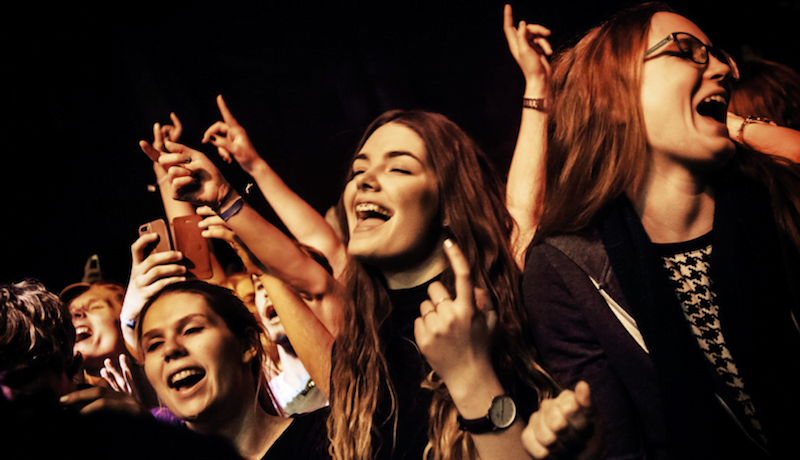 Fans at Where's the Music? 2015 in Norrköping

Where’s the Music? 2016 is coming: the second edition of the Swedish conference and showcase festival will return to Norrköping from 11 to 13 February.

The first Where’s the Music? (WTM) attracted 4,689 festivalgoers, 410 delegates (from companies including CMJ, Melt! Festival and Coda Agency) and 144 bands and artists performing in 10 venues.

“The first edition of WTM was a success,” says Niklas Westergren, head of marketing for organiser FKP Scorpio. “With more visitors than we’d expected, and a bigger interest from music industry and media than we’d dared to dream of, we are very excited to develop WTM even further. With the successes from 2015 we are eager to go the whole hog this year.”

For its second year, WTM has enlisted the services of Billetto’s Jonas Fläckerud, who Westergren describes as “a dedicated business developer [who] will be a great asset to the organisation”.

Thank you for the music, Sweden!
Is there a link between innovation and creativity? In the country of Abba and Bergman would one expect Ericsson and Spotify to emerge? Are innovators creators and creators innovators, or do they need different things?

Sweden is not on a global trade route, and is not a military power. It has a huge social state infrastructure. Is it a country of calm, organised uniformity, or risk-taking, emotional individuals?

Can an examination of Sweden show any conditions that help with innovation and culture, or is there simply something in the Nordic water that can not be replicated elsewhere?

Where’s the money?
As new and innovative ways of consuming music emerge, it is increasingly confusing to know what value each use of music earns, and then where that money goes. Money is needed to incentivise investors in music and to reward creators. We know how consumers pay for music, after that, it all gets complex. So, where’s the money?

The most valuable player
In this session we are marching on stage the people who make it all happen, the ones working the long days and taking care of the things others forget or maybe just try to forget. Behind every good boss there is an amazing assistant, and many of the current leaders of the industry have entered their way into the business through internships. Let’s hear what the current and ex-assistants have to say about their work – and their bosses!

Touring in the Nordics
Hundreds of promoters, thousands of festivals and venues spread across over a million square metres in Sweden, Finland, Norway and Denmark – and over three million square metres if you include Greenland and Iceland. How do you go about booking a successful tour in the Nordics; how do you pick where to play and who to work with? Is it worth the investment to build up a career as an international artist in these countries who are dominated by local artists, and what is the return on the investment even if you eventually break in a market size of one big American city?

The irresponsible party
Festivals have always been places of letting go, and most of us have at least once or twice behaved more or less irresponsibly in a festival environment. Many things can go wrong quite easily in a big crowd. What can we do to prevent this from happening while still encouraging people to have fun and go crazy without harming each other?

Is there life beyond streaming?
Streaming is already the dominant form of music consumption in some countries, particularly in Scandinavia, with downloads now seeming more like a temporary transition stage to streams. But is the streaming model as epitomised by the likes of Spotify the end of the road for how we will consume music in the future? What lies next beyond the current streaming model? With Rdio gone, what does the future hold for the surviving streaming services? How much further can streaming services grow? Can Spotify become the new Netflix? And how are the labels having to adapt to a consumption model based more upon access rather than ownership?

“I want one million dollars”: Equality, equity and entertainment
Makten Över Musiken (MÖM) presents one hour of gender infotainment about why you should love equality if you love profit. Half of the population – meaning half of all potential music listeners – are women, so how come only 20 per cent are represented among the CEOs and A&Rs in Sweden? MÖM is a mentorship program for women within the Swedish music industry. It was initiated in 2012 to raise the question about gender and diversity behind the executive desks in Swedish music business. Today, the program also includes a leadership program and seminars and workshops all over Sweden.

What makes a great sync song?: Creative trends in music supervision (presented by SynchAudio)
Many artists and songwriters today earn more money from getting their music licensed than they do from actual sales of their music. But what makes a great sync song and what are the latest creative trends in synchronisation? Watch scenes from the panellists’ recent and current work and discuss the challenges of being a music supervisor, both from a creative perspective and a legal perspective.

Indies <3 major labels
There seems to be no more confrontation between the major and indie labels. Are they all one happy family? The indies create content for majors to distribute and administer. Is this a win-win situation or just a way to survive financially? Does this help indies to be more creative or will this lead to consolidation

Where’s the service?
How much does a ticket cost? Some years ago everyone needed to have a physical ticket to get in to a show, and there were printing and distribution costs connected to this. Nowadays we’ve got passbook, different apps, QR codes and digital distribution making the physical ticket unnecessary. At the same time the various service fees connected to the tickets have only been going up, so what is the service the consumers and/or promoters pay the ticketing companies for? How much can it cost to sell and buy a ticket?

“A teaspoon in a waterfall”
How do we discover the new acts? Back in the days it was the local record store owners and music journalists telling us what to listen to. In the digital age there are so many ways to find new music but does it really help us or just make it even more complicated? How do we know which artist will make it and who are the real gatekeepers of today?

The responsible party: Is Bono killing polar bears?
Promoters, agents, artists, audience, media and managers – it’s a heterogeneous business, but it has the same obligations towards future generations as any other business out there. Nowadays we tackle topics such as social challenges, climate change and endless growth. Do they also concern the live music and festival industry? Isn’t this just all about entertainment? We will discuss the influence of the players in the game. Responsibility, conscience, sustainability – whose job is it? We’d like to find out who can spearhead this discussion, where the potentials are and what makes people hesitate to raise their voice.